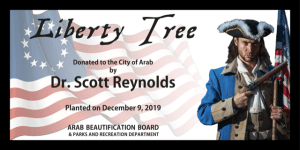 Although few today know the story of the Liberty Tree, in the years leading up to the American Revolution, local patriots in each of the 13 colonies, who called themselves “the Sons of Liberty” identified a large tree to be used as a meeting place. Where there was no suitable tree, a large pole was erected and appropriately called a Liberty Pole. Silas Downer captured the importance of the Liberty Tree in these moving words: “We do therefore, in the name and behalf of all the true Sons of Liberty in America… dedicate and solemnly devote this tree, to be a Tree of Liberty. May all our councils and deliberations under its venerable branches be guided by wisdom, and directed to the support and maintenance of the liberty, which our renowned forefathers sought out and found under trees in the wilderness. May it long flourish, and may the Sons of Liberty often repair hither, to confirm and strengthen each other. When they look towards this sacred Elm, may they be penetrated with a sense of their duty to themselves, their country and their posterity.”

The first Liberty Tree was an elm in Colonial Boston. Realizing the tree’s importance and valuable political symbolism, British soldiers destroyed it in 1775. Thomas Paine, one of the galvanizing forces behind the American Revolution immortalized the Liberty Tree through his famous poem:

In a chariot of light from the regions of day,
The Goddess of Liberty came;
Ten thousand celestials directed the way
And hither conducted the dame.
A fair budding branch from the gardens above,
Where millions with millions agree,
She brought in her hand as a pledge of her love,
And the plant she named Liberty Tree.
The celestial exotic struck deep in the ground,
Like a native it flourished and bore;
The fame of its fruit drew the nations around,
To seek out this peaceable shore.

Unmindful of names or distinction they came,
For freemen like brothers agree;
With one spirit endued, they one friendship pursued,
And their temple was Liberty Tree.

Beneath this fair tree, like the patriarchs of old,
Their bread in contentment they ate,
Unvexed with the troubles of silver and gold,
The cares of the grand and the great.
With timber and tar they Old England supplied,
And supported her power on the sea;
Her battles they fought, without getting a groat,
For the honor of Liberty Tree.
But hear, O ye swains, ’tis a tale most profane,
How all the tyrannical powers,
Kings, Commons, and Lords, are uniting amain
To cut down this guardian of ours;

From the east to the west blow the trumpet to arms
Through the land let the sound of it flee,
Let the far and the near, all unite with a cheer,
In defence of our Liberty Tree.

As the years passed, other Liberty trees died or were destroyed until the last of the original Liberty trees stood on the campus of St. John’s College in Annapolis, Maryland, the alma mater of Francis Scott Key.

The History of the Last Liberty Tree

The St. John’s College Liberty Tree has a history as old as that of the Maryland colony. It was already a mature tree, green and flourishing, when Annapolis residents staged their own tea party and burned the vessel Peggy Stewart. It was in yellow leaf when 4,000 French troops marched through the city to join General Washington at Yorktown in 1781. And it stood in wintry silhouette when Lafayette, watching from a specially erected pavilion, attended a review of soldiers on the college green during two days of festivities honoring him in December 1824.

Reputed to be the last of the so-called Liberty Trees in the United States, the tulip poplar survived a bolt of lightning and an explosion of gunpowder within its trunk, plus the vagaries of wind and weather during four centuries. In 1961 it was featured in Ripley’s “Believe it or Not” cartoon strip as “The Poplar That Would Not Die!”

It was under the Liberty Tree’s branches that the Sons of Liberty met to hear Samuel Chase and other patriot-orators. Annapolis residents also gathered there to determine whether or not people who had not joined the association of patriots should be driven out of the colony.

During the 19th century, the Liberty Tree continued as an important landmark. For years it was a favorite place for Annapolitans’ Fourth of July picnics. College legend has it that President Hector Humphreys, an enlightened man of science, once saved the Liberty Tree when the hollow trunk was set on fire. He rushed to the scene armed with chemicals from the St. John’s laboratory to extinguish the blaze.

On another occasion in the 1840s, schoolboys apparently could not resist the temptation to explode two pounds of gunpowder within its hollow. The tree appeared destroyed, but the escapade had an opposite effect; the next year the tree put out lush new growth. “The explosion destroyed worms that were gnawing away at its vitals,” one account said.

In the late 19th and early 20th centuries the Liberty Tree had become such an object of fame that the Peggy Stewart Tea Party Chapter, Daughters of the American Revolution, decided to erect an iron fence to protect the tree from souvenir hunters, who were chipping away at its bark. The chapter dedicated the fence on December 18, 1924, the 100th anniversary of Lafayette’s last visit to Annapolis.

In 1907 John T. Withers, landscape architect and forester, restored the Liberty Tree in what was then thought to be the largest single accomplishment of tree surgery in the world. Decay, begun many years previously, had continued to the point that the trunk was a shell 13 inches thick. The cavity extended 56 feet up the tree. This was thoroughly cleaned out to a depth of several feet down into the ground, the cavity was given an antiseptic wash, and the tree was filled with concrete reinforced with steel andiron. The job required 55 tons of concrete.

The tree’s age has been subject to review. Once thought to be 600 years old, it may be closer to 400 years old. A Maryland Department of Forests and Parks study of the rings in 1971 put their numbers at about 366, indicating the tree’s age in years.

In April 1975, winds opened up a six-foot-long crack in the upper trunk and widened it as much as four inches. To prevent damage by another storm, tree surgeons removed a number of branches to lighten the top and filled the crack with a pliable mastic, secured on either side by six bolts.

When the tree finally succumbed to age and weather, its diameter was 102 inches, measured four and a half feet from the ground. The tree was about 96 feet tall and had a total spread of 60 feet. The Liberty Tree received special care from a local horticultural expert, but, after 400 years, the tree was too old to withstand the beating it took during Hurricane Floyd in September 1999. On October 25, the Liberty Tree was taken down following a ceremony celebrating its long life.

Today, thanks to the efforts of Mark Mehnert a local resident and landscaper, the historic wood was rescued and a national treasure was saved!

The Legacy of Liberty

We are also pleased that through our bud grafting program, seedlings directly descended from this last tree are being planted across the country. Our current partners include Rare Find Nursery, Pleasant Run Nursery, the Stihl company, Resurrecting Lives [Foundation] and numerous 4H Clubs.

Like the original Sons of Liberty who as “freeman like brothers agreed” to “defend their liberty tree”, Providence Forum is using this majestic symbol to Revive the Spirit of Liberty in America.