The Arab Historic Village has become one of the most widely-toured historic destinations in the Southeast. Development of the Village began in 1991 as a Centennial project to honor and pay tribute to the pioneer-spirited settlers who built this area into the prosperous, community-minded city it is today. Nestled just behind the Arab City Park, this Historical Complex showcases ten historic buildings that portray a North Central Alabama rural community of that time. All have been preserved with authentic furnishings and décor that date back to the 1880’s to 1940’s era.

The Arab Historical Society invites you to grab some friends and come take a tour of the Arab Historic Village. It’s also the ideal learning experience for school field trips.  Students will learn first-hand what life was like in the 1880’s to 1940’s, including going to school in a one room school house.  The current cost for a field trip is $5 per student and includes a snack. Covered pavilions are a few steps away at the Arab City Park so feel free to bring a sack lunch and make a day of it.

In cooperation with the City of Arab and the Arab Parks & Recreation Department, the Arab Historical Society continues to develop the Village, and seeks grant funding to help with future development costs if and when available.

Annual Events at the Village 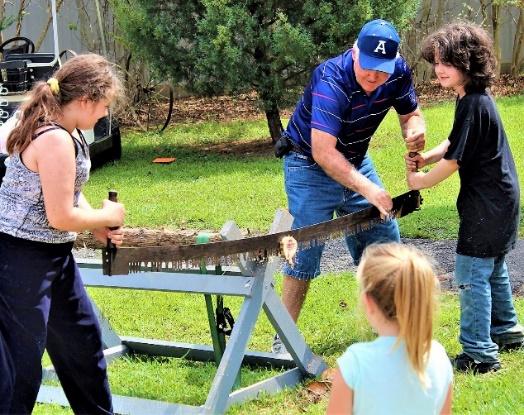 Back When Day is held each year on the last Saturday in April.  Come hear the stories of what life was like way “back when.” Visitors get to interact with volunteers as they demonstrate tasks that were necessary back in the early 1900’s to be a successful farming community; quilting, grinding cornmeal and black-smithing were certainly among the list.

In the 1935 Hunt School, you’ll get a glimpse of what it was like to go to school “back when.” Then you’ll need a snack, so stop by Smiths’ Country Store for a moon pie and an ice-cold RC Cola to sip on as you try your luck at a game of Checkers (against an opponent that’s been playing the game for decades). 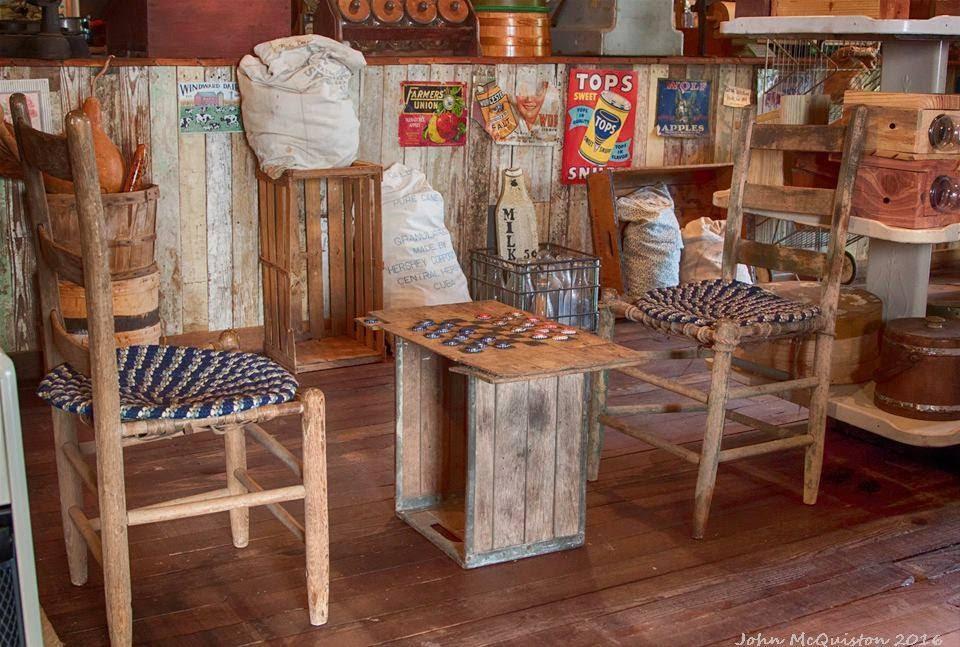 Crafts are provided for the children, and local groups will be performing BlueGrass and Ole’ Time Gospel Music.  Country dinner plates are sold and piled high with pulled pork, beans and greens, and all the fixins’.

Santa in the Park

Every year on the fourth Friday in November (Friday after Thanksgiving), the magic of the holidays comes to this historic setting.  For four consecutive weekends, and in conjunction with Christmas in the Park, there’s a man by the name of Santa in the Park, too.  Visitors come from near and far to stroll through Santa’s Village, an over-the-top display of merriment and holiday splendor.  You’ll meet Mr. Claus himself, so don’t forget your camera… there are photo ops everywhere you look.

After meeting  Good Saint Nick, head on over to Phillips’ Blacksmith Shop and watch ‘em work ~ it’s really neat to watch  ~ just before stopping by Mrs. Lola Boyd’s 1890 Farmhouse for some cookie decoratin’ and potato-candy makin’.  Then make your way to Smiths’ Country Store to sip a cup of fresh hot cocoa and warm up…

…because just maybe, the most important stop you’ll make in Santa’s Village, will be the Smalley Grist Mill.  Where else will you find a bag of fresh reindeer food to take home for Dasher and Dancer and the other 7 reindeer?  Those little guys definitely need a snack after all that flying. Whew… I can’t even imagine.

All historic buildings will be open, adorned with holiday spirit, and filled with people making holiday history, and magical photo ops will be literally everywhere, so come capture the full spirit of Christmas this season at the Arab City Park.

The 27th Annual Christmas in the Park “Lighting Ceremony” begins at exactly 6 pm on November 27th, and there aren’t enough words to describe it.  It’s one of the best things you’ll do all year. The AHS Jazz Band bring the holiday feels with jazzy renditions of everyone’s holiday faves, and carolers wander along the paths adding unexpected moments of bliss with their acapella harmonies.

Admission is $6 per person.  Children under 2 are admitted free.

Elvin Light’s dream of developing a museum led to a lifetime of collecting local artifacts from the years he knew best.  With donations and lots of helpfrom volunteers, his dream finally became a reality in 1998, when the Elvin Light Museum was opened at the Arab Historic Village.

Offering interesting insight into Arab’s past, you’ll find displays that are near-perfect replicas of typical business settings from way back when. Displays of rooms representative of the homes of that era feature original furnishings and vintage pieces, and are meticulously set to depict what homes looked like all those years ago.  Tools, collectibles and other items typical of the era are displayed throughout the Museum, and it’s so interesting to see how much things have changed, and how far we’ve come.

This two-room school was for students in first through sixth grades.  Named after Jesse and Sarah Hunt, it was built in the Strawberry Community in 1935, and was donated to the Arab Historical Society in 1990 by Bobby Miller.  The Society moved it to the Arab City Park and restored it as a Centennial project, and it

became the first installment at the Arab Historic Village. Visitors get a glimpse of early education before there were cafeterias and running water.

The Rice Church, formerly known as Liberty Church, was built around 1911 as a Primitive Baptist Church in the Rice Community. It was donated to the Arab Historical Society in 1993 by the Pleasant Ridge Baptist Church, and was then moved to the Historic Village at Arab City Park. Restored by volunteers and members of the Historical Society, the church officially opened in October of 1995 with a Sacred Harp Singing. Mrs. Shirley Gullion is still a regular performer there, giving visitors some good ole’ Southern Gospel, accompanied by piano and soul-stirring dulcimer. Children always appreciate her renditions of the folk songs they have long loved. The Rice Church may be reserved for weddings and singings. Cost is $100.

Smith’s Country Store was constructed by the Arab Historical Society in 1997 as a vintage country store, and is representative of the years between 1930 and 1940.  It mirrors a typical area store before supermarkets and specialty shops came into play, and is filled with items that would have been purchased in country stores back then, but were donated from all over Brindlee Mountain and the surrounding areas instead.  During Santa in the Park and other public events, you can purchase baked goods, fresh cider, moon pies, RC Colas, and all sorts of goodies in the country store.

The Homemakers’ Clubhouse was built in the late 1930’s by men from the Ruth community.  They decided to each donate a tree and provide a meeting place so their ladies could hold Home Demonstration club meetings.  Not only did they hold meetings there, but they also enjoyed activities like quilting, knitting, mattress-making, and canning. The building was donated to the Arab Historical Society and opened on September 8, 2001.

The Boyd Farmhouse was built by Matthew Allen Boyd and his wife Eletter Kennedy Boyd.  They came to Brindlee Mountain and chose to purchase and homestead 160 acres of land on a ridge; this would later become part of the town of Arab.

Their youngest daughter, “Miss Lola” (Boyd) as she was fondly called, was a retired school teacher who lived all her 99 years in the farmhouse.  She later would will it to the citizens of Arab to be received and restored by the Historical Society. The house has the traditional L-shape, as did many homes of the period. It contains a hall, 4 rooms and 2 porches, sixteen-foot ceilings, and an original front door with sidelights.

The home and décor is representative of the early 1940’s, so after electricity, but before many other modern conveniences.  As you enter the large, dine-in kitchen, you can almost smell cornbread baking in the old wooden cook stove.

When newcomers first moved to an area in the early days, one of the first things they would do was find a grist mill and blacksmith shop nearby, so the Historic Village wouldn’t be complete without them.  Area citizens donated the old lumber that was used to give the Smalley Grist Mill its authenticity, and Mr. Jerrel Smalley donated the grist mill equipment. Everything works perfectly, and as in the days of old, a visit today yields the smell of freshly ground cornmeal. During the Christmas holidays, children are delighted to receive packets of “reindeer food” from the old Grist Mill.

A side shed to the Grist Mill houses the “Cobb” family’s wagon.  Mr. Craton Cobb made a special trip to Albertville, Alabama in 1930 to buy the John Deere wagon from Thompson Furniture & Hardware Co.  The cost was $140, and because of the tender care it was given, it served his family well through work and play for many years, until it was donated to the Historical Society.

The Phillips’ Blacksmith Shop is also built from reclaimed lumber, and area citizens donated the equipment as did Mr. Smalley for the Smalley Grist Mill.  The Village has been blessed with trained blacksmiths who fire up the pit from time-to-time, and actually produce what would have been a tool of necessity in years gone by.

The blacksmiths have also been known to make a pair of “reindeer shoes” for an eager youngster during “Santa in the Park.”

Lelton and Faye Westbrook had planned for years to have his father’s combination well and smoke house moved to the Historic Village as part of the Boyd Homestead.  Before the move could take place, the old house that had so faithfully served the Westbrook family fell into disrepair. It was decided that a new well and smokehouse would be constructed, just like the old one, with Lelton and Faye donating all usable parts of the old one, as well as many new ones.  Several other members of the Historical Society donated time and money to the project, and so the Westbrook Well – Smoke House became the first installment of “out-buildings” to accompany the Boyd Farmhouse in the Homestead.